Right, as we still haven't got the rear wiper working, I'm hopeless with electrical stuff and Bill was off doing important stuff, like work, I got on with something oily and yuk.

Steering rack removal. There is a leak from somewhere, so I decided to give the rack an overhaul.

Despite looking like it wouldn't budge (the other one didn't) the track rod end came off quite easily. It is a teeny bit seized, which helped. 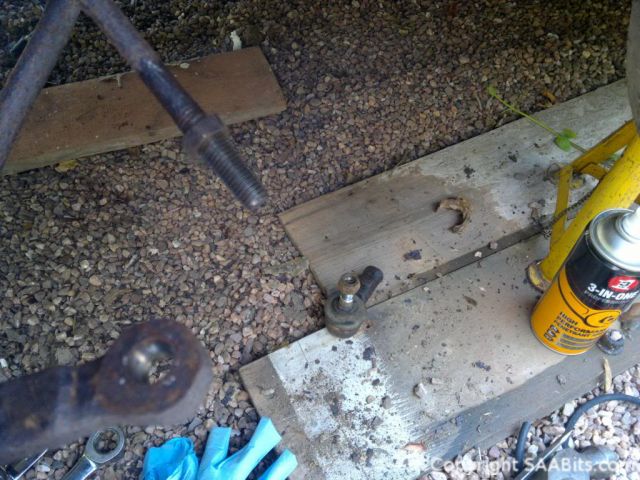 What didn't help, was me bracing myself against the edge of the wheelarch when heaving on the ratchet... 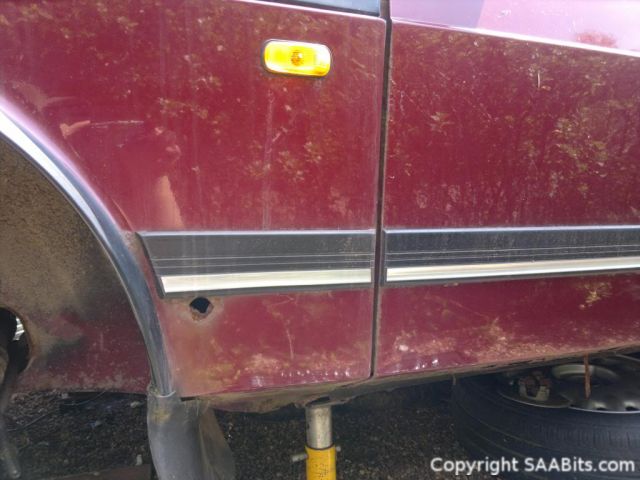 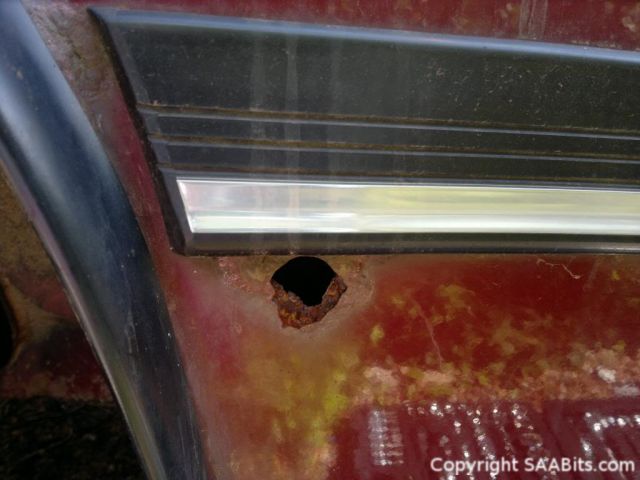 Got the rack out eventually, without making any more holes in the car (my knuckles being a different story entirely!) but it wasn't easy. After taking a couple of pipes and the hose off and still finding it far harder than the rack on Bill's 900, it dawned on me-front anti-roll bar! I might try to remove it before re-fitting the rack, but the bolts are in a scarily crusty condition. Eeeep!

I have degreased it, it was vile! Makes it much nicer to deal with, plus I can bring it into the house

It's a genuine SAAB rack, probably original but it appears to have a crack in it. I won't know any more until I have it stripped down. The pipes were pretty crusty too, but don't look too horrendous underneath (at least the one I've done so far doesn't!), just a bit of pitting.

'im indoors wants me to do a 'fixing your rack' procedure, bit like the one I did for the 9000 rear brake calipers, so it might be a while for the update on this part of the project, although I hope to have it mostly done over the weekend (famous last words) then maybe tackle the ARB. Ooo, goody........

This is the seal kit I'm using, it's from a different supplier to the previous one but it contains the same seals. There is an odd one in the kit. Maybe this is for the earlier rack? I did wonder.

I have found a problem. The blue one, I think is the piston ring which has an o-ring to go with it on some racks. Of the two smaller black seals, the one on the left is the outer rack seal and the one on the right is supposed to be the lower pinion seal, but it's too small. I've been in touch with the supplier to obtain a lower seal, as I thought I'd lost it. They sent me out a new one, but it's the same as the 'random' seal in the kit

I'm going to send them the one that came out to see if they can match it up to one, as the old one is knacked and I really need a replacement! I have also ordered a seal kit for the 9000 rack and it has the same lower pinion seal as the 900, i.e one that is bigger than the one in the kit!

Found a bigger problem with the rack

I can see why it was leaking so much now.


I'd dismantled it and cleaned it, sorted the problem out with the seal supplier (got the right lower pinion seal in the end!) and decided today was a good day to put it all back together. So I went out to the garage with the housing and the relevant seals, had a look inside the housing to check for any bits that might have got in and found this-

The rack itself has worn through the housing far enough to expose the pinion housing above it. Guess it's scrap now

Still, at least I found it before I'd put it together and re-fitted it to the car.

My guess is, someone has refurbed/adjusted the rack and failed to back off the nut, pushing the rack back against the housing. I'm just glad I found the hole before I'd put it back on the car, bled the air out and realised it was still leaking! I would not have been a happy bunny

Anyway, I was all set up to put the damn thing back together and it wasn't going to happen with that one, so in the best Blue Peter fashion, here's one I prepared earlier!

Ok, I know it's a 9000 one, but hey. It had been taken apart to check for damage, then put aside until I got around to getting some seals. Unlike the 900 one, there was no damage and I finally got some seals, so it's now this-

Now I've had that bit of practice, I've started on this one...

It's an earlier rack and as joH900 says above, it's got a different pinion housing.

Subscribe to our newsletter for periodic updates and valuable coupons.