with additional photos by Blue Cortina

The Saab 9000 and later Classic 900 rear brakes include a self-adjusting handbrake mechanism. Over the years the actuating lever can become stiff, preventing the handbrake adjuster from working properly and causing a loss of handbrake and footbrake effectiveness. Since there appears to be a complete lack of information available about the internal workings of these calipers, the usual advice on Saab forums is to replace the calipers with new or reconditioned items. However, GirlySaabFan tackled this problem by rebuilding the calipers herself. This is her story...

All the parts replaced in this procedure are available here. Ensure the repair kit you use includes the metal disc. Most don't.

Here's a little story about the reason my 9000's handbrake was rubbish.

Be warned-some pictures are scary!! But there is a happy ending. 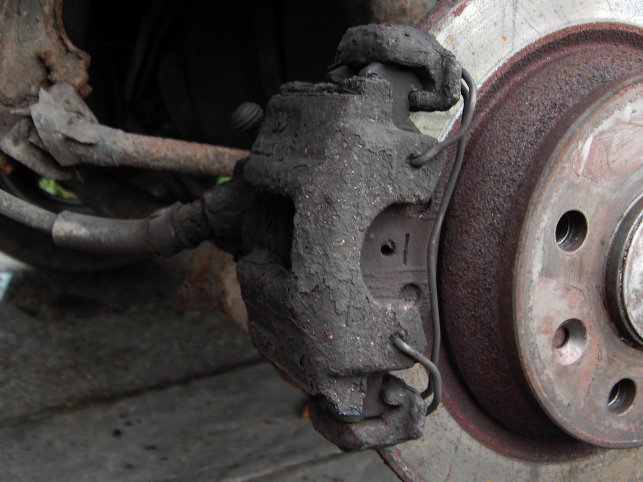 Mmm, nasty! Actually it's not that difficult to repair these. Even I can do it, and I'm a girl! 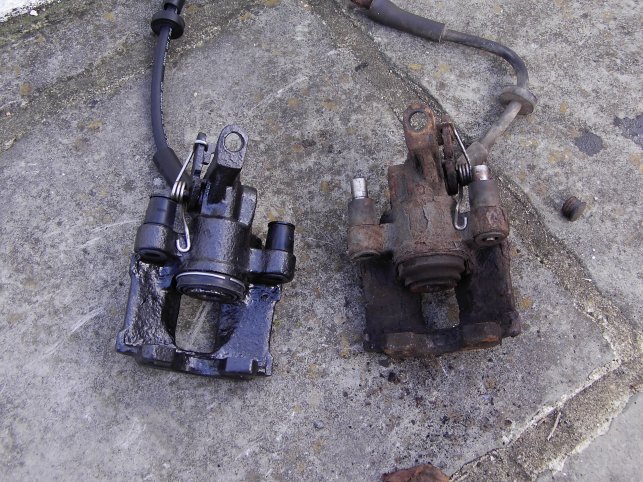 See. Bet you can't tell which is which?!

First take nasty rusty thing off the car, remove brake pads and retaining clip and stick it in a vice. The brake hose came off fairly easily using a pipe wrench-the bleed nipple was another story! Which is discussed elsewhere. 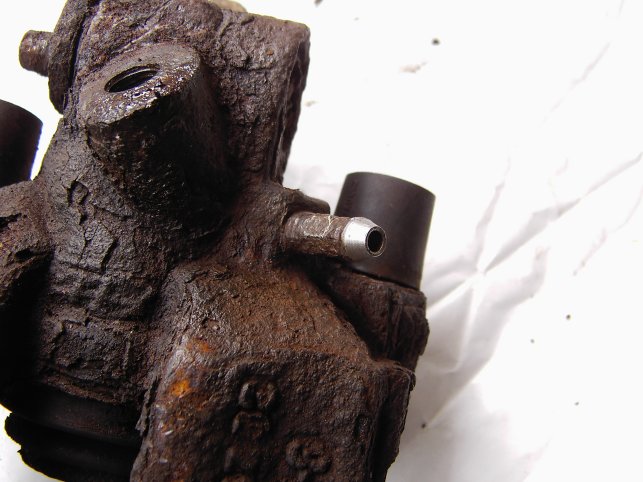 It is as knackered as it looks. So, while that is soaking up some penetrating oil, remove the lever return spring and piston. DO NOT try to press or blow the piston out-it won't work (it's screwed on) and you may damage something. It's handy to have something to catch the brake fluid in and some rags or paper towels to hand, I made a bit of a mess. Oops.

Using an allen key, or similar, turn the adjustment screw CLOCKWISE, this will push the piston out. 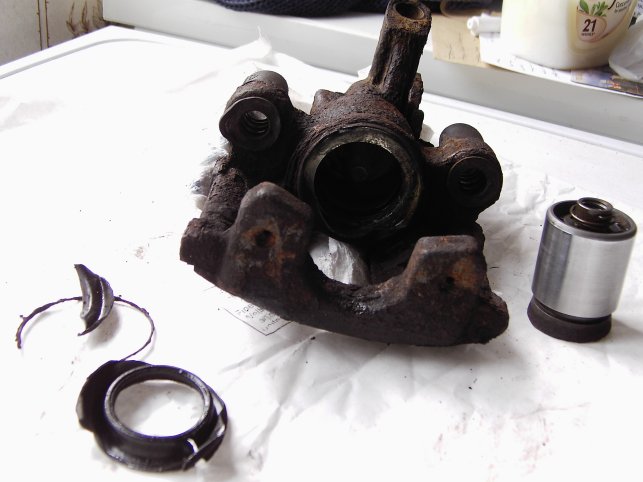 The dust boot was so rust-glued on, I had to tear it to get the piston out! 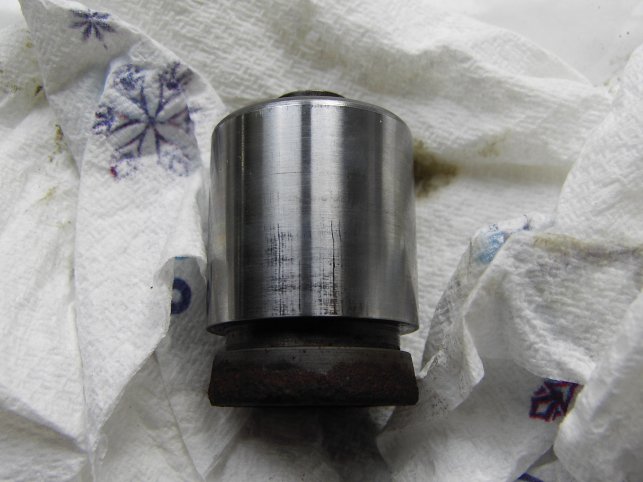 Piston looks ok. Slightly scored (looks worse than it is), but usable. If it looks knacked, I'd bin it and get a recon. caliper.

Now for the tricky bit! At the bottom of the bore there lurks a circlip. You will need a pair of longer than usual circlip pliers, or, failing that, a bit of imagination and some of those odd bits of stuff you kept just in case they might come in useful!! 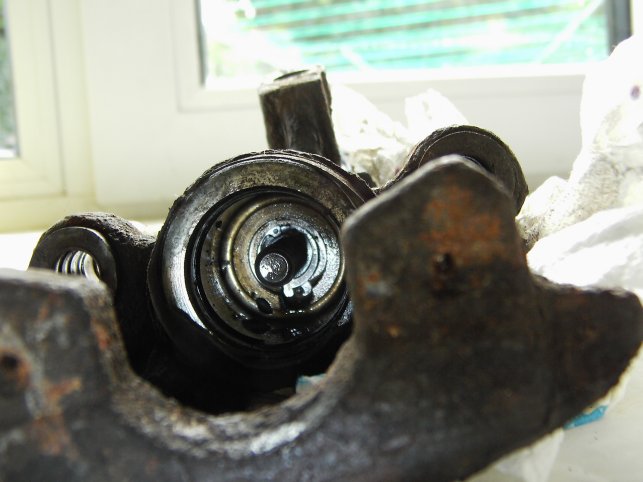 When you've finally extracted the little sod (that'll be the circlip then!), pull out the screw in the middle, taking care not to damage the threads. If you turn the adjuster clockwise, while gently pulling the screw, it should come out-don't lose the pin that sits in the end of it!.

Drill a small hole in the metal disc that covers the end of the handbrake actuator lever, then remove the disc by levering it out with a screwdriver inserted in the hole. This will reveal the circlip at the end of the lever spindle. Remove the circlip and washer. The lever should now come out. 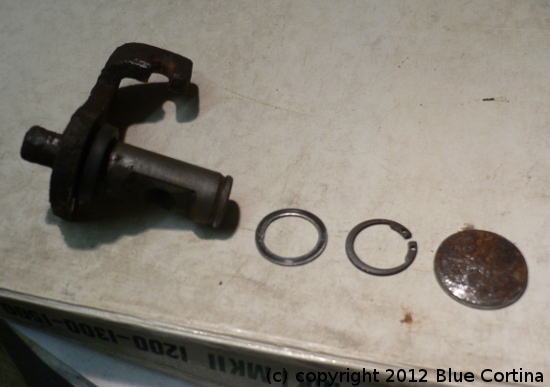 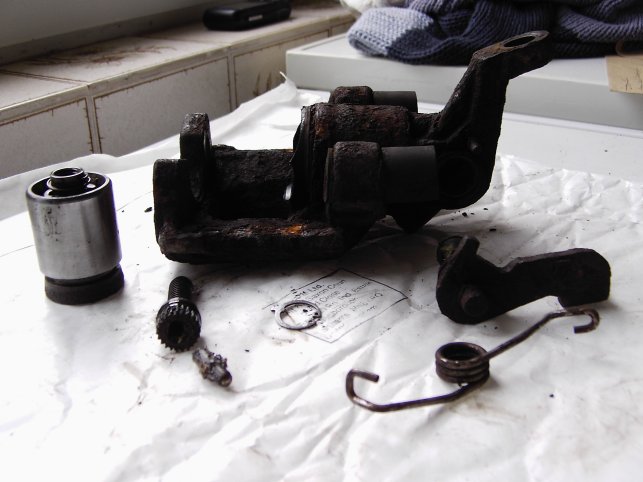 Voila! All you need to do now, is clean it up and put it back together again. Easy.

Ok:- All cleaned, painted and ready for reassembly. How you make yours look presentable is up to you. Bit different, isn't it? It is the same one, honest!

All the parts I replaced are available from here. 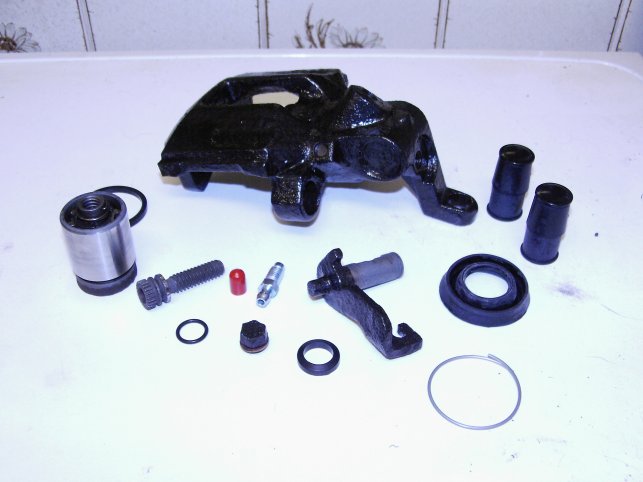 And here's how I put it back together.

First dip the o-ring in some fresh brake fluid and slip it over the threads of the screw and into the first groove. See below. 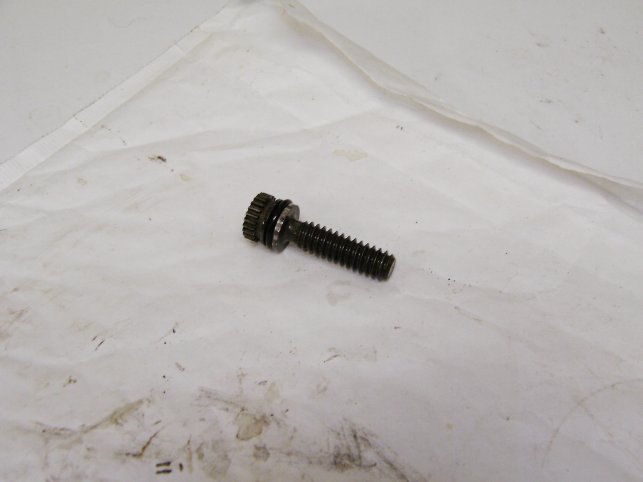 Do a similar thing with the piston seal, dip in brake fluid and carefully slip it into it's groove in the bore, making sure it's not twisted. Easiest to do this by hand.

Push the seal onto the actuator lever and push it back into it's socket. I used brake assembly grease on it. The flat side of the seal goes towards the caliper body. 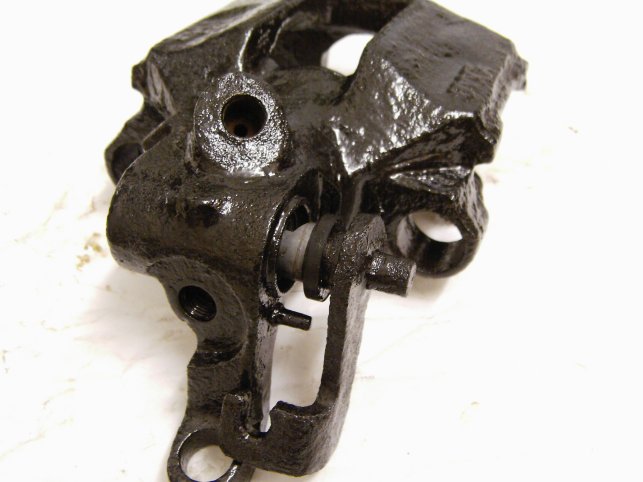 Refit the circlip and washer to the end of the lever and tap in the new disc using a suitably-sized socket. 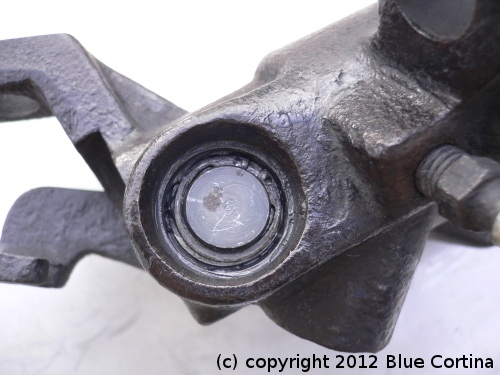 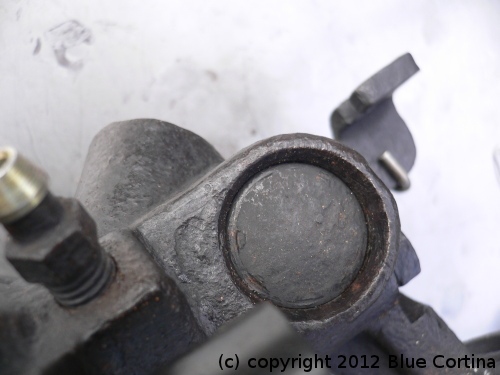 Then put the pin/rod/wotsit thing into it's cup on the head of the screw-I used grease again to hold it in place. 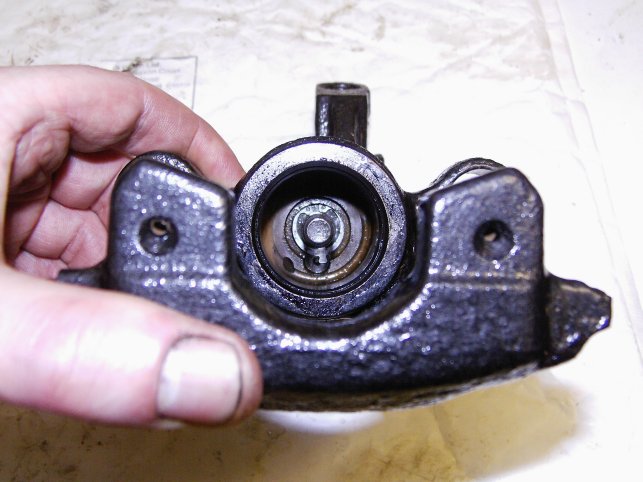 Insert the screw into it's socket in the bottom of the bore, and re-insert the circlip (have fun), the circlip is slightly curved and should be located with the tab pointing upwards.

If you find it's very difficult to get the circlip in, try giving the screw a gentle tap to make sure it's fully seated. Give the piston a light coating of assembly grease and fit the dust boot, apply grease to the small hole in the middle of the piston- this means the screw threads will be thoroughly greased too. 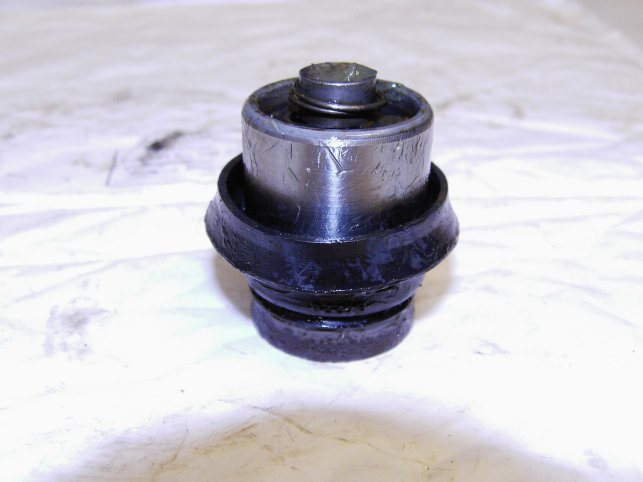 Line the hole in the piston up with the screw, and whilst pressing fairly firmly on the piston, turn the adjuster screw anti-clockwise. This will draw the piston in. Keep going until it stops, then fit the dust boot and retaining clip. 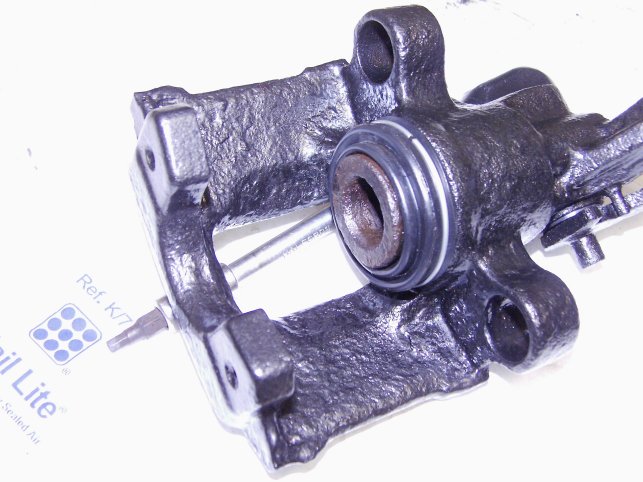 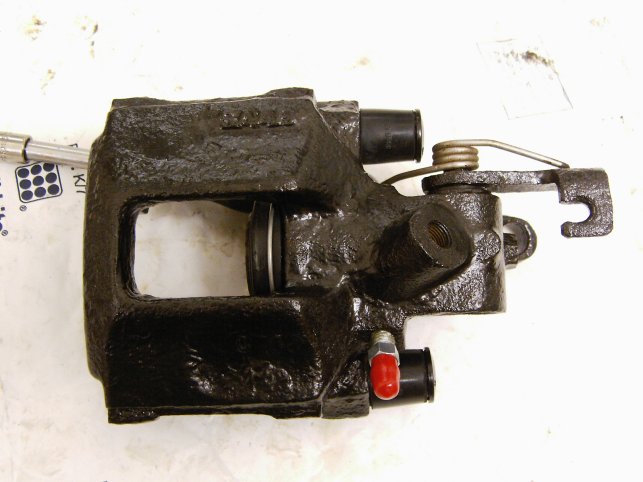 Refit bleed screw, lever return spring and the rubber sleeves the pins go through. Put them back on the car and adjust as necessary. Sorted. You should now have a working self adjusting handbrake. 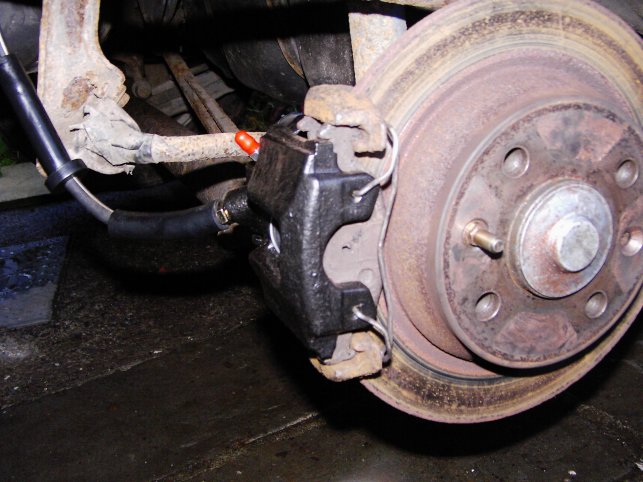 The caliper carriers were too rusty to remove. The pads will also be replaced in the near future, but the handbrake works!!!

See, I told you it had a happy ending.